Menu
Log in
Register
Install the app
You are using an out of date browser. It may not display this or other websites correctly.
You should upgrade or use an alternative browser.

Hi all. And while Mordor goes completely crazy. We do not plan beyond 1-2 days.
Body work has been halted.
I spend only scheduled repairs (replacement of silent blocks, shock absorbers and oil).
We went to an interesting place "Pike Lake".
Some pre-apocalyptic photos from the "journey". 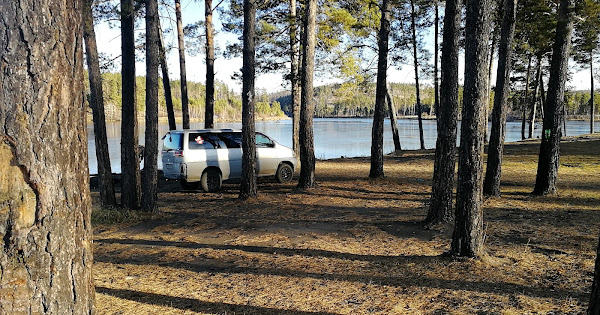 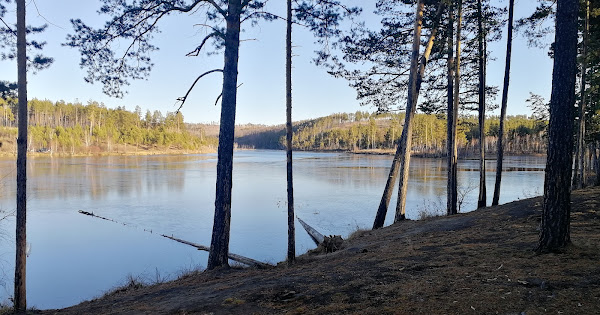 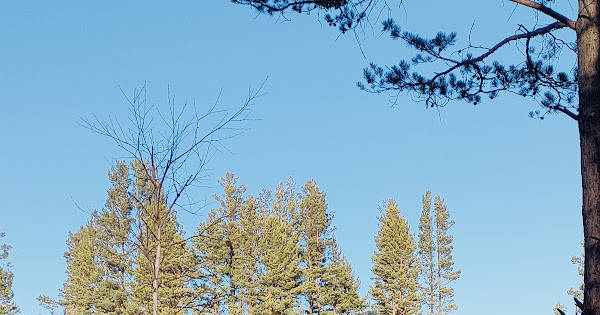 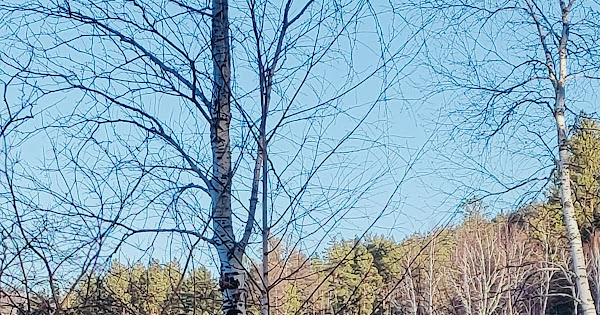 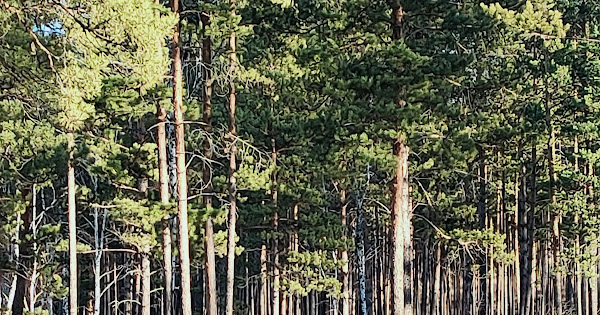 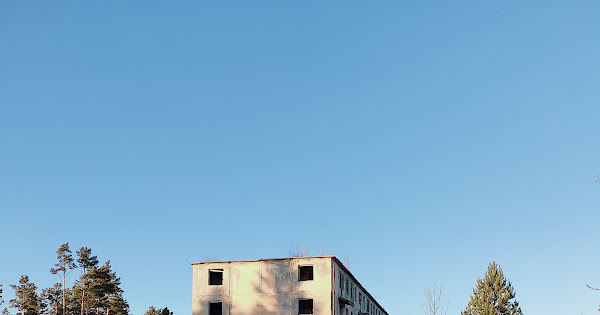 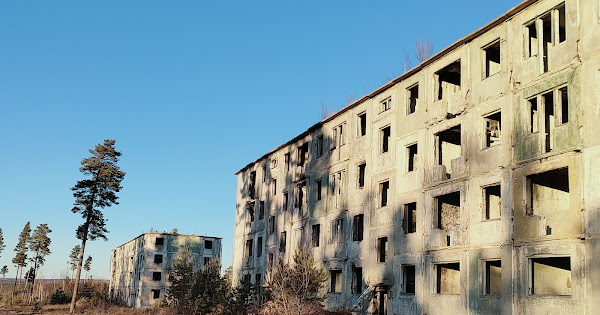 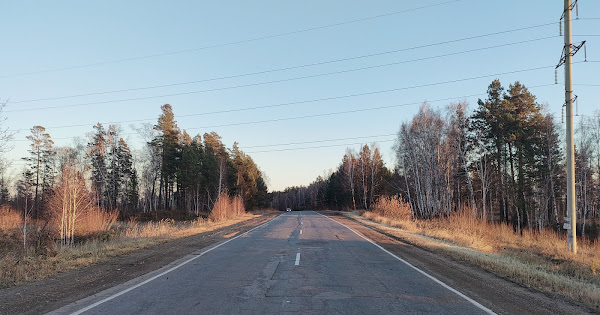 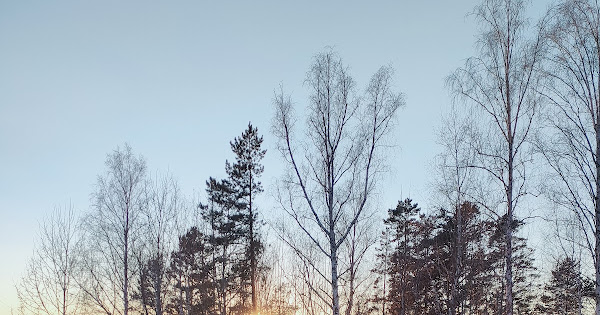 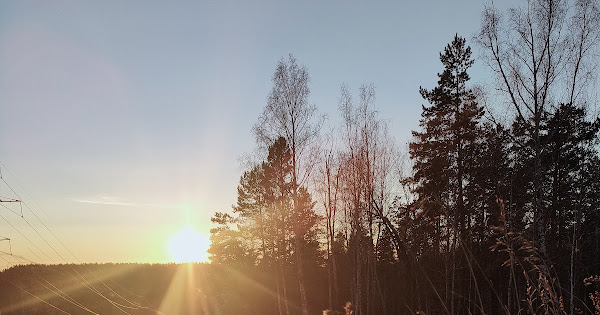 Enjoying this blog! Just wondering - what wheels do you have on your van?

theorhys said:
Enjoying this blog! Just wondering - what wheels do you have on your van?
Click to expand...

Hello from Siberia)
Well, it seems like winter has begun) at night -20) In the afternoon -7 warm) I
want to write something, but nothing really happens with the Tractor) The tractor drives, carries all sorts of weights, tried to drown it in the snow - it doesn’t sink, it rows with all its paws)
For repair. nothing special. did a scheduled inspection of the suspension, revealed one silent block on the rear lower longitudinal rod, which is asking for a replacement - I will do it a little later (not critical). I plan to change the filter and oil in the engine (standard procedure).
Body .. I think I will do it in the spring.
now El looks more like Frankenstein, without a rear bumper, the right side is one color, the left is another)) In general, nothing special, El rides well and well))

I'll tell you about one machine that I owned for 8 months. Isuzu bighorn 2001. Engine 6VE1 3.5 liters. 235 horsepower . To be honest, it was a crazy act) to buy such a gasoline-eater) This monster ate 25 liters per 100 km, regardless of whether it was a track or off-road. )) There was one drawback - an extremely unreliable automatic transmission from General Motors - 4l30E, damn it. 2 attempts to repair this creature have failed. The creature was kicking and deafening . But. What I liked is the feeling that you are floating on the road, a magnificent interior, ideal seats, ideal proportions of the body (square shape), this is (a great invention of man) the TOD transmission, where I could turn on the auto mode and, without fear of ice, rush at a speed of 100 km / h on track). And the greatest thing is that I was able to sell this Bighorn without losing money)) By the way, after the bighorn, I realized that I like the auto WD mode, like on Elgrand (one of the reasons why I bought Elgrand). Elgrand.. However, this is a completely different story.
some photos of Zeleboba (as I called him):
Now it's on sale again. 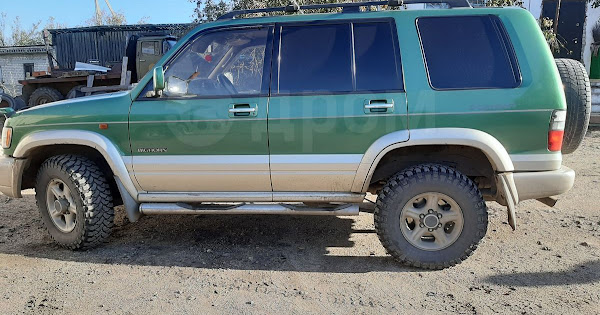 PS.
Bought a steel pipe. I plan to make a cargo platform on the roof, for the transportation of heavy loads and goods such as a wooden board, furniture panels, steel sheets.
G

Put ski's on the roof, then you'll be OK if you turn it on its roof in the snow and ice.

Hi all. Yesterday a very mini meeting of our Elgrand club took place)
in the evening, -26 degrees. the strongest Siberians have arrived)
Few photos) 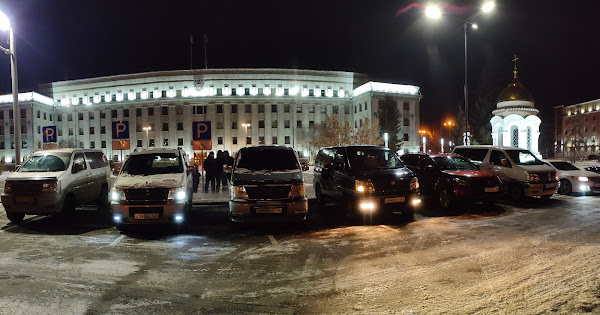 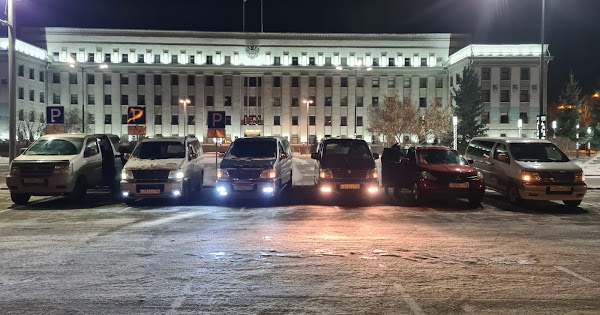 This is not the coldest) it can even reach - 45. A Siberian is not one who does not freeze, but one who dresses warmly)

If I come to visit - I will look like this.

And diesel ... I have El stored at night in the garage. I try to maintain the temperature in the garage around -10 or -15 degrees, this is provided that it is about -30 and below outside. In order, because in a warm garage it rusts faster. -10, -15 is quite a comfortable temperature for a diesel engine. Sometimes I add diesel additives. Once, at -45, while moving along the highway, diesel fuel began to freeze in the tubes, as a result, the fuel filter clogged up and I somehow drove to the city))))
G

Do you have a wind powered generator for your electricity?

George322 said:
Do you have a wind powered generator for your electricity?
Click to expand...

Winter fun after a hard day) 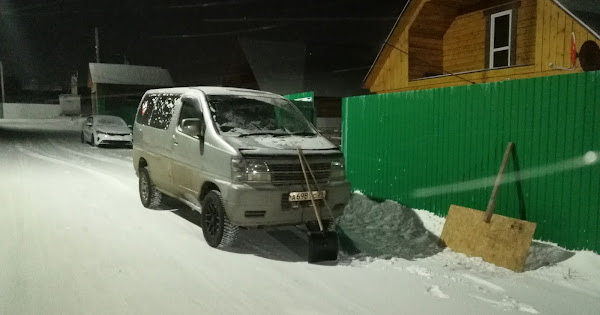 With these freezing temperatures and snow, I assumed you lived in the far north. Then I read that the beautiful Lake Baikal near you is at a similar latitude to the UK.

I'm glad we've got the gulf stream to keep our air relatively warm but am following your posts worth renewed interest... should climate change shift that current elsewhere, we'll all be glad of your tips for running our cars in such low temperatures!

MarkT said:
With these freezing temperatures and snow, I assumed you lived in the far north. Then I read that the beautiful Lake Baikal near you is at a similar latitude to the UK.

I'm glad we've got the gulf stream to keep our air relatively warm but am following your posts worth renewed interest... should climate change shift that current elsewhere, we'll all be glad of your tips for running our cars in such low temperatures!
Click to expand...

Baikal is 120 km away from me. It is a pity that we do not feel much of its influence on our climate. It would be a little warmer, but damp .. Our neighbors Yakutia have much lower frosts ..

And the city of Baikalsk, which is located on Lake Baikal, is protected from low frosts. But in winter they have frost "bites" due to high humidity) in general, I would advise you to visit Baikal (wild, not popular places) in August and February (when the ice rises).
You must log in or register to reply here.
Share:
Facebook Twitter Reddit Pinterest Tumblr WhatsApp Email Share Link
Top